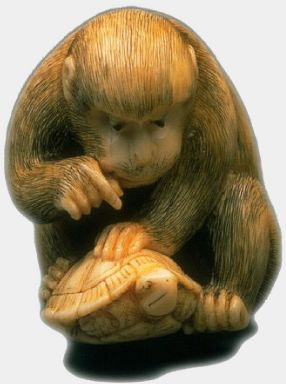 The netsuke chosen to represent 2016 is a Monkey, squatting, pointing at something on his left hand holding down a tortoise. Ivory with well defined hair-work, eyes inlaid in dark horn, early nineteenth century, signed Okatori.

The monkey was first worshiped in return for some supposed services rendered to the individual who went to India, by special command of an Emperor of the Tang dynasty, to obtain the Sacred Books of the Buddhist religion. This Emperor deified the monkey, or at least he conferred the august title of “the Great Sage equal to Heaven” upon that quadruped.

The monkey is believed to have the overall control of hobgoblins, witches, elves, etc. people often imagine that sickness or want of success in study and trade, is caused by witches and hobgoblins. hence the sick, or the unsuccessful, worship the monkey in order to obtain his kind offices in driving away the evil influences of various imaginary spirits or powers.

The monkey is considered a sensual and very impudent animal. In old long bygone days, monkeys were used in the Imperial stables to watch over the horses which are believed to venerate.

The monkey is probably the most popular animal and has been made the hero of many legends.

It is said that if you are born in the year of the Monkey you are likely to be an erratic genius.

Of course it is not that simple; 60 is merely the most common denominator of 10 x 12, the ten representing the 5 elements but in order to make it ten, the Japanese have adopted a big (elder) brother and small (younger) brother of each of the five stated elements. In all eastern languages, big brother and younger brother is one noun each, and not formed by a noun (brother) plus an adjective (younger or bigger [elder]) like in western languages. Actually, in 2016 the year of the Monkey starts on February 8, 2016 and lasts till January 28, 2017.

As the 9th animal in the Eastern zodiac, the monkey indicates the hours between 3 pm and 5 pm.

Best wishes for a great Year of the Monkey!

Both Uschi and Willi wish you a wonderful spring and summer season with lots of fun, happiness, good health and some great relaxation or a vacation with friends and/or family.